This tutorial explains how to continuously build and push an image to Artifactory.

Build and Push Docker Image to JFrog Artifactory. This tutorial explains how to continuously build and push an image to Artifactory. We will start with a simple Node.js application, run some CI tests and code coverage, and then package the application into a Docker image and push it to Artifactory. Install Artifactory & Jenkins (with aws cli) using docker - installartifactoryjenkinsec2amazonlinux.md. Artifactory is an open source repository manager for binary artifacts. Unlike some of the other registry services in our list, Artifactory focuses on artifact management, high availability and security; for instance, it leaves the builds to your build servers. Similar to Quay and Docker Hub, Artifactory comes in two flavours: an on-premise.

We will start with a simple Node.js application, run some CI tests and code coverage, and then package the application into a Docker image and push it to Artifactory.

This document assumes you're familiar with the following concepts:

If you're unfamiliar with Docker, you should start with learning how to implement this scenario manually. Refer to our blog for a step-by-step tutorial: Build and push a Docker image to JFrog Artifactory.

There are many build services for Docker, but they offer limited functionality in addition to building an image. For example, you will not be able to run CI tests, code quality checks, code coverage, etc, before building your Docker image.

This tutorial will take you on a step-by-step journey on how to achieve this scenario.

Before you start, you should be familiar with the following Shippable platform features:

The following sections explain the process of configuring a CI workflow to continuously test, build and push a Docker image to Artifactory. We will use a Node.js app that uses Mocha and Istanbul for unit testing and code coverage.

Source code is available at devops-recipes/node_app_jfrog

Complete YML is at devops-recipes/node_app_jfrog/shippable.yml

You can clone our sample repository to follow this tutorial.

Integrations are used to connect Shippable Platform with external providers. More information about integrations is here. We will use a Docker registry integration in this scenario. 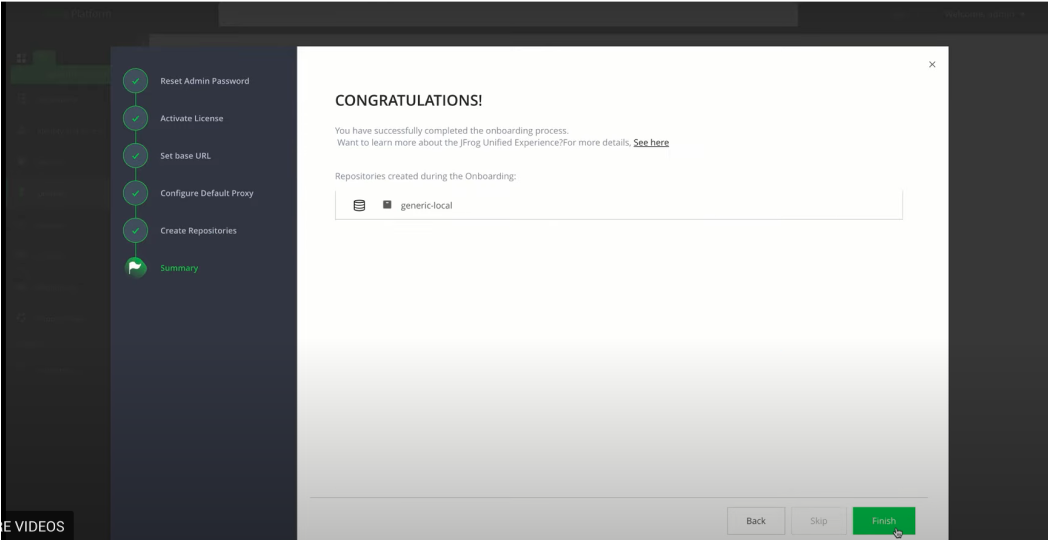 Detailed steps on how to add a Docker Registry Integration are here.

The platform is built with 'Everything as Code' philosophy, so all configuration is in a YAML-based file called shippable.yml.

2a. Add empty shippable.yml to your repo

Add an empty shippable.yml to the the root of your repository that contains your Dockerfile.

Configure CI steps by adding the following code snipped to the YML file. If you're using a clone of our sample repository, the config is already present. You'll just need to make a few edits as noted below:

The above YML does the following things:

3. Enable the repo for CI

For automated builds, we need to enable the project for CI, which will automatically create the webhooks required to continuously build the project.

Detailed steps on enabling a repo are here.

You can either manually trigger your CI project or commit a change to the application git repository which should automatically build your project.

Verify that your image was pushed to Artifactory!

CI is a developer focused activity that produces a deployable unit of your application, a Docker image in this instance. If you want to add a Continuous Delivery workflow which deploys your application into successive environments like Test, Staging, Production and runs test suites, the downstream jobs performing these activities will need to know where to find your Docker image.

This section shows how you can output your Docker image information into an image resource which can be used by downstream jobs.

Here are the additional concepts you need to know before you start:

The following steps shows how to dynamically update the tags of an image resource when the CI process that generates the image is finished.

Source code is available at devops-recipes/node_app_jfrog

Complete YML is at devops-recipes/node_app_jfrog/shippable.yml

1a. Add resources section of the config

resources section defines the image resource which holds information about the Docker image and its location.

Here we are creating an image named node_app_jfrog_img_jfrog that can be accessed using credentials from the integration drship_artifactory_docker. versionTemplate has the information used to create the first version of the image. sourceName contains the location of the image and the versionName contains the tag. isPull is used to configure whether the image is automatically pulled or not. Each time a new tag is created, a new version of the resource will be created.

1b. Add jobs section of the config

A job is an execution unit of the assembly line.

In order to treat your CI workflow like an Assembly Line job, i.e. be able to define IN and OUT resources, you need to define a runCI job with the name of your repository appended by _runCI.

In this section, we will define the runCI job that will specify node_app_jfrog_img_jfrog as an OUT, meaning your CI workflow will update this resource.

Add the following at the very end of your shippable.yml:

To update the node_app_jfrog_img_jfrog resource with Docker image information, such as image name and tag, add the following to the build section of your shippable.yml:

Add the following YAML config after the CI config:

This section does the following things:

In order to read your Assembly Line configuration from Github, we need an integration. Add drship_github integration.

Detailed steps on how to add a Github Integration are here.

Next, add the configuration to your Shippable subscription. Jobs and resources section from your shippable.yml are parsed to create the workflow.

Detailed steps to add an Assembly Line are here.

If you change the view of your Subscription page to SPOG view, you should see something like this:

Add a commit to your repo and you should see the CI process kick off, which builds a Docker image and then pushes it to Docker Hub. The tag info is then pushed into the image resource as a new version.

If your image resource is an IN to another job in your workflow that deploys the image, that job will be triggered every time the image version is updated.