Django, described as the The web framework for perfectionists with deadlines is a high-level Python Web framework that encourages rapid development and clean design. In this post I will show you how to get Django up and running in a docker container. The first thing you will need to do is install docker compose.

You should have python3 installed. To check which version of python do you have installed, just run:

Step 1 - Set Up Your Development Environment

Whenever you are starting a new web development project, it’s a good idea to first set up your development environment. So, let's create a new directory for your project to live in, and move into it:

This command will create a folder venv in your working directory. Inside this directory, you’ll find several files including a copy of the Python standard library. Later, when you install new dependencies, they will also be stored in this directory. Next, you need to activate the virtual environment by running the following command:

You’ll know that your virtual environment has been activated, because your console prompt in the terminal will change. Itß should look something like this:

Once you have a python virtual environment enable, you need to add the standard Python project dependencies file which is usually named requirements.txt, and the Django dependency to it. Good, once you have created and added the dependencies, the file should look like this:

With the Django dependency added, you can then install Django using the following command:

Once installed, you will find that you now have access to the django-admin command line tool, which you can use to generate the project files and directory structure needed for the simple “Hello, World!” application.

Let’s take a look at the project structure the tool has just created for you:

You can control the application for development purposes using the manage.py file, which allows you to start the development test web server for example:

Congratulations, you’ve created a Django site! The next step is to create apps so that you can add views and functionality to your site.

To create the app, run the following command:

This will create another directory called hello_world with several files:

Once you’ve created the app, you need to install it in your project. In mysite/settings.py, add the following line of code under INSTALLED_APPS:

That line of code means that your project now knows that the app you just created exists. The next step is to create a view so that you can display something to a user.

Navigate to the views.py file in the hello_world directory. There’s already a line of code in there that imports render(). Add the following code:

You’ve defined a view function called helloworld(). When this function is called, it will render an HTML file called hello_world.html. That file doesn’t exist yet, so let's create it. Create that directory and subsequently a file named helloworld.html inside it:

Add the following lines of HTML to your file:

You’ve now created a function to handle your views and templates to display to the user. The final step is to hook up your URLs so that you can visit the page you’ve just created. Your project has a module called urls.py in which you need to include a URL configuration for the hello_world app. Inside mysite/urls.py, add the following:

Now, when you restart the server and visit localhost:8000, you should be able to see the HTML template you created:

Good job!!! You’ve created your first Django app and hooked it up to your project. Now, let's run inside docker container.

Before creating a container for the Django application and shipping it off, you need to install Docker on your local machine. For learning purpose, you will install Docker Community Edition. Select your OS from the list below and follow the setup instructions;

The next stage is to add a Dockerfile to your project. The structure of a Dockerfile can be considered a series of instructions on how to build your container/image.

The first directive in the Dockerfile, FROM python:3.7 tells Docker which image to base our container on. We use the official Python image from Dockerhub that comes with Python and Linux setup for you, ready for use in a python project.

You are now ready to build the container image, and then run it to see it all working together.

To build your container, you will use the docker build command and provide a tag or a name for the container, so you can reference it later when you want to run it. The final part of the command tells Docker which directory to build from.

The command tells Docker to run the container and forward the exposed port 8000 to port 8000 on your local machine. After you run this command, you should be able to visit http://localhost:8000 in your browser to see the “Hello, World!” response.

In order to install the django docker container, create a new app via cli or admin panel and set a port to 8000.

Before push the container you need to enable the URL into the django ALLOWED_HOST. So go on mysite/setting.py:

Now you can deploy your django app without a massive build time. 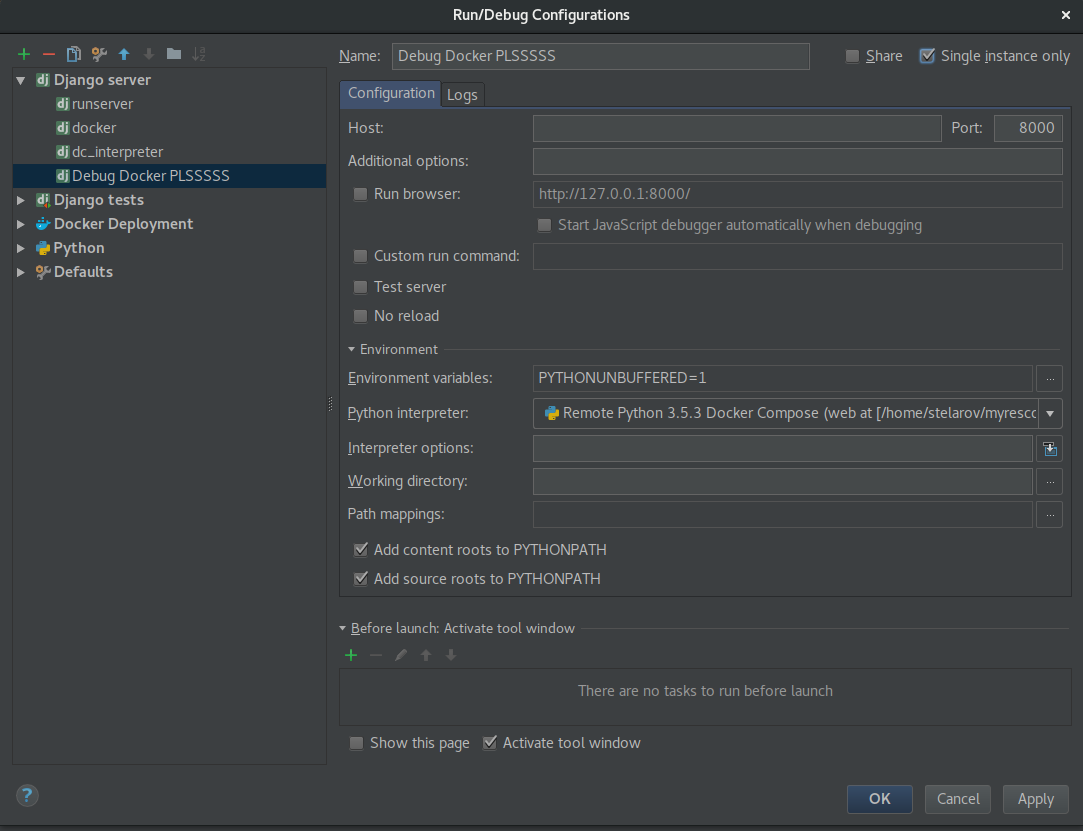 Now you can deploy your django app without a massive build time.

Use the right tools can make the difference and save time. Due to that, the initial steps are very important when starting a new project from scratch. Then, I am going to show you how to set up in Windows 10, a Django project with Docker in Visual Studio Code where you can debug your project an easy way.

If you want to see the code more in details, You can find the final repository for the project on my Github.

Below you can find the links to download the required software.

Once you have installed the required software, we can start to set up our environment for Django.

Let’s install the required extensions in Visual Studio Code for our environment.

As I told you before, if you want to see the code more in details, you can find the final repository for the project on my Github.

So, in my case I am going to clone the repository from Github.

In the branch”django-setup-project-docker” you can see the code.

And start a new branch as “initial”.

3. Setting up Django with Docker in Visual Studio Code

At this point, you can notice some files that was added in your project. These files contain the Python and PostgreSQL configuration for Docker. The following step is re-open the project in a container as I show you in the image below.

Now, let’s modify files a bit. Let’s start with “devcontainer.json” as I show you below.

We continue with “docker-compose.yml”.

And finish with “Dockerfile”.

To continue and according to our configuration in “Dockerfile”, we must create a folder called “requirements” which will have several packages based on whether our need is to debug. For that, there will be the following files:

The first file called “requirements.txt” which is the core of our environment.

And the second file called “development.txt” to debug.

Now, we rebuild the container.

At this point, if you want to check that everything is ok, you can run the command below in a bash console (Terminal in VSC) getting the following result.

Now, let’s create the project based on Django

If everything is ok, you should be seeing a file structure like the following.

So now it is time to set up the Django database. We are close to finishing our environment.

Let’s do some changes in “settings.py”. First of all remove the string connection for sqlite3

Then, let’s add the following code

Set up the database through pgAdmin based on the previous configuration.

So now it is time to run the server.

Surely, you got the following output.

Let’s continue with the migrations.

Run the code below.

After that, run the following code to create the super user. You can check the correct creation of the super user through pgAdmin.

Finally, we have arrived at the end of this post. The set up of debug mode of Django project with Docker in Visual Studio Code. So, let’s do it.

Go to a debug configuration as I show you in the image below.

Press “Django” and select it.

Now, you can run Debug mode. Consider that the port will be change for Debug mode. So, to access it, I suggest you “Follow Link (ctrl + click) as the image below shows.

To enable linters other than the default PyLint, open the Command Palette (Ctrl+Shift+P) and select the “Python: Select Linter command” and then “Pylint”.

This command adds a file with code below.

So now, you are free to add new configurations or even apps to the project and develop as normally. I hope this tutorial was helpful for you. Let me know any doubts about it and good luck!