This guide will help you get started with Laravel 7 and Docker on Windows.

In case of a Laravel app, this can be translated into the following steps: writing a Dockerfile for the application. Building a Docker image from the Dockerfile and pushing it to the registry. Pulling the image and running launching the app on the server. In this guide, we're going to containerize a simple calculator written with the Laravel. In this case, our Laravel application will be created in the /var/www/laraveldocker directory of the php-apache container. However, it will be persisted in the src directory in the project directory on the local development machine.

To continue ensure you have Docker and Git installed on your windows PC.

Being a windows user,
When you mount volumes in Docker for database use, it does not let you access that volume via the windows host file system, (this applies to volume mounts not bind mounts) as “When running linux based containers on a windows host, the actual volumes will be stored within the linux VM and will not be available on the host’s file system” .
Which becomes an issue when you want to backup your databases. So I prefer to have MySQL, Mongo etc. installed on my host PC, making backups, and data manipulation easier.
I use Laragon for this purpose which starts up with windows and starts my MySQL and Mongo Db’s automatically.

For my development I use the Visual Studio Code IDE.
2 changes to make your life easier are. 1. Install the docker plugin, which will allow you to manage containers and images in your IDE, and set your default terminal to bash.

Create a folder with your desired project name

Create a copy of .env.example and name it as .env

Now we will create a folder to hold our docker files and docker container configurations , and we will have a docker-compose.yml file which will be used in development to launch our containers. Create the following folders and files

Docker Compose is a tool for defining and running multi-container Docker applications. With Compose, you use a YAML file to configure your application’s services. Then, with a single command, you create and start all the services from your configuration.

Contents for each of the files are below.
Customize container names accordingly in your docker-compose , webpack.mix.js and app.conf (line 12)
Container name can not contain spaces, use slug style names.

docker/nginx/certs/localhost.crt
(We use self signed certificates for SSL)

docker/nginx/certs/localhost.key
(We use self signed certificates for SSL)

docker/php/local.ini
(Add any php ini settings you would like to overwrite in here) 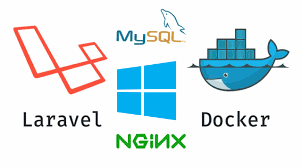 docker-compose.yml
(if you are app does not have a UI , then you can remove the Node container and access your app on https://localhost . If you want to run a database as a container , you can add it here.

Dockerfile
(The PHP container is managed from this file. you will run migrations and artisan commands against this container as explained later)

Edit you Laravel webpack.mix.js file
(Setup browser sync to a specific port that we exposed in our docker-compose.yml file)

That’s all the boiler plate you need to get started.

In order to connect to MYSQL or any database on you host PC , in your .env set your DB_HOST=host.docker.internal

Once done and subsequent runs (Hot reloading)
Access your app on https://localhost:9056

Code can be found on https://github.com/zaidk26/laravel-dockerized To get your application deployed to production environment, a great tool to use is Dokku. Dokku helps you build and manage the lifecycle of applications. It will allow you to git push your code to your server, which will automatically re-bulid and and deploy your container with the new changes. Digital Ocean is a great and cost effective VPS provider that has one click installs for Dokku, (Tip. use a VPS with a least 2 GB of Memory) .

Choose the setup the best suits your needs.

A) Setup for Single Project

A.1) Already have a PHP project:

Note: If you are not using Git yet for your project, you can use git clone instead of git submodule.

To keep track of your Laradock changes, between your projects and also keep Laradock updated check these docs

2 - Make sure your folder structure should look like this:

(It’s important to rename the laradock folders to unique name in each project, if you want to run laradock per project).

1 - Clone this repository anywhere on your machine:

We’ll need to do step 1 of the Usage section now to make this happen.

At the top, change the APP_CODE_PATH_HOST variable to your project path.

Make sure to replace project-z with your project folder name.

B) Setup for Multiple Projects:

1 - Clone this repository anywhere on your machine (similar to Steps A.2. from above):

Make sure the APP_CODE_PATH_HOST variable points to parent directory.

2 - Go to your web server and create config files to point to different project directory when visiting different domains:

4 - Add the domains to the hosts files.

If you use Chrome 63 or above for development, don’t use .dev. Why?. Instead use .localhost, .invalid, .test, or .example.

If you are using Docker Toolbox (VM), do one of the following:

We recommend using a Docker version which is newer than 1.13.

Warning: If you used an older version of Laradock it’s highly recommended to rebuild the containers you need to use see how you rebuild a container in order to prevent as much errors as possible.

You can edit the .env file to choose which software’s you want to be installed in your environment. You can always refer to the docker-compose.yml file to see how those variables are being used.

Depending on the host’s operating system you may need to change the value given to COMPOSE_FILE. When you are running Laradock on Mac OS the correct file separator to use is :. When running Laradock from a Windows environment multiple files must be separated with ;.

By default the containers that will be created have the current directory name as suffix (e.g. laradock_workspace_1). This can cause mixture of data inside the container volumes if you use laradock in multiple projects. In this case, either read the guide for multiple projects or change the variable COMPOSE_PROJECT_NAME to something unique like your project name.

2 - Build the environment and run it using docker-compose

In this example we’ll see how to run NGINX (web server) and MySQL (database engine) to host a PHP Web Scripts:

Note: All the web server containers nginx, apache ..etc depends on php-fpm, which means if you run any of them, they will automatically launch the php-fpm container for you, so no need to explicitly specify it in the up command. If you have to do so, you may need to run them as follows: docker-compose up -d nginx php-fpm mysql.

You can select your own combination of containers from this list.

(Please note that sometimes we forget to update the docs, so check the docker-compose.yml file to see an updated list of all available containers).

Note: You can add --user=laradock to have files created as your host’s user. Example:

You can change the PUID (User id) and PGID (group id) variables from the .env file)

4 - Update your project configuration to use the database host

Open your PHP project’s .env file or whichever configuration file you are reading from, and set the database host DB_HOST to mysql:

You need to use the Laradock’s default DB credentials which can be found in the .env file (ex: MYSQL_USER=).Or you can change them and rebuild the container.

5 - Open your browser and visit your localhost address.

Make sure you add use the right port number as provided by your running server.